REquipment Is… An Accessible Promo Video!

Sharing this project with AT3 Center blog readers is irresistible. To conclude our series on accessible video making, embedded here is a one-minute promotional video I made for the Massachusetts durable medical equipment (DME) reuse program, REquipment.
As with the other posts in this series, my goal here is to demonstrate that making an accessible video is within reach for most lay people. Below I share my lessons learned, but honestly, I’m tickled pink with how this one turned out. The iOS app iMovie gets most of the credit.
https://youtu.be/L4lLLPI1vlU&rel=0

As before, my objective is for my video’s information to be accessible to viewers who are deaf/hard-of-hearing and viewers with visual impairments. This time I also wanted to create an upbeat video for sharing on social media, one of those videos that’s already rolling when you trip across it on your Facebook or Instagram feed. This governed a few important decisions.

Loyal readers will recall that one option for open captions is to use the iOS app Clips. Clips, however, has no capacity for adding audio description. The website YouDescribe is a great option for retrofitting audio description if a video is uploaded to YouTube. But sharing a YouDescribed video on social media is not very satisfying; only a link is provided to your feed. The same is true for sharing directly from YouTube.
Videos uploaded to a Facebook page, however, do roll and captions may be added using Facebook tools. What I wanted, however, was a video ready to share across social media platforms. I also wanted captions to show for all users and Facebook captions may be turned on or off in settings. The iMovie app proved to be a good solution.

As mentioned in Part 3 of this series, the iMovie app is available for iPad and iPhone, and allows for adding a second audio track for voice over and audio description. For this project, to my delight, I discovered iMovie can additionally layer theme music. For “REquipment is…” I experimented with the iMovie theme “Simple” and the music it provided worked well. I never looked further. 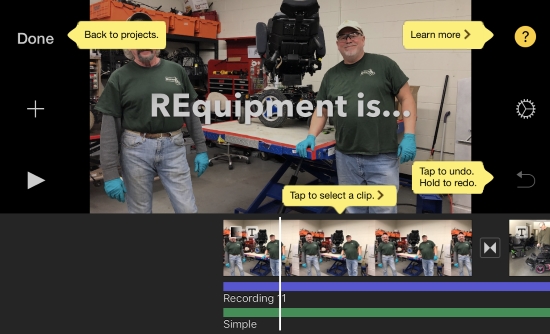 iMovie app screenshot with two audio tracks. The green is the Simple theme music. The purple is voice over and audio description.

I enjoyed blending photos and video clips (with their sound muted) to illustrate the statements conveyed with titles, dragging them around the timeline with my finger. I chose to add interest by making the videos black and white and speeding up their playback to mimic an old movie reel. iMovie tools gave me these options as well as choices for transitions between the images and the length of time each still would move across the screen (an effect iMovie describes as “Ken Burns.” You can turn this off too.) 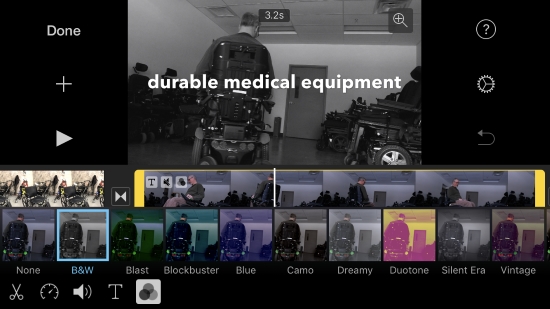 iMovie screenshot with black and white option for the video clip selected.

The downside to using titles with the iMovie app, I found, was it gave me little control over their placement or any control of their color. The shower chair is mostly white and I had to use a small title style with that image to place the words where they would be visible. iMovie for Mac provides greater control over text font, color, and size (but I don’t have a Mac). 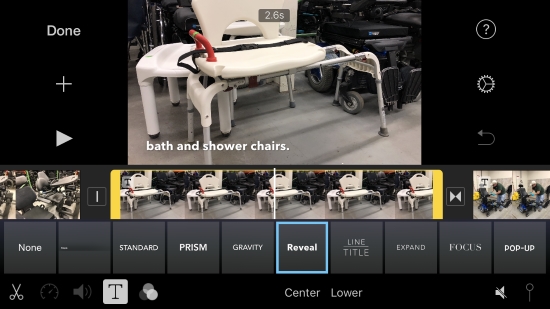 The biggest challenge I had making this video was deciding how to break up my script into titles. This was governed by how much text a title could hold, what messages I wanted to emphasize, and what media I had on hand to complement them. All three considerations were continuously in play as I moved through the project.

My aha moment came when I saw the advantage of recording voice over (reading the titles) and audio description (describing the action) together in one continuous track. There were several reasons to do it this way:

Free AT Webinars in May
Next