Published On: August 30, 2018•Categories: AT Tips, Emerging Tech, for Voting•

Accessible Voting of the Future? Under Development in LA County… 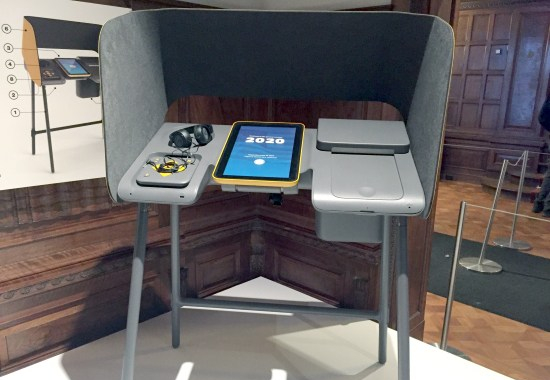 The prototype for an accessible voting system on display at the Cooper Hewitt Smithsonian Design Museum. The system was created by the design firm IDEO in collaboration with Digital Foundry and Cambridge Consultants for Los Angeles County in 2015

We left off describing the retreat from direct electronic voting that has been underway since at least 2009 and the unintended consequences security concerns have had on the accessibility of voting systems. If anything, the commitment to return to the paper ballot has only accelerated since the 2016 general election. In California, however, a system that aspires to crack the barriers to universal voting access continues under development as part of a larger statewide voting access reform effort.

That initiative moves Los Angeles County away from a limited number of polling places to potentially hundreds of “vote centers” focused on user needs. The County plans to include secure electronic voting systems with a verifiable paper back up at each vote center. They will also provide additional services, such as language assistance, translated materials, ballot drop off, and access to replacement ballots. (Learn more about the Los Angeles County Voting System Redesign).

IDEO, the design firm re-imagining the LA County voting experience, has created an electronic voting system prototype using principles of Universal Design. Their voting booth incorporates assistive technologies as well as language translation and is adaptable to the changing needs of this very diverse county. 11 languages are currently supported by their device.

“I think the first thing a good design process can do to make sure that people’s voices count is to engage them in the process of design itself” reflects Caricia Catalani, lead the research for IDEO on early prototypes (at this SoundCloud produced by Radio IDEO).

IDEO designers sought input from users with disabilities at multiple voting system design intervals. One participant was Ernie, a retired postman, who is blind. Designers observed Ernie getting to know the voting booth using his hands, and realized the system should be safe to touch and inviting. The result was a voting booth with rounded edges.

“When you interact with a device or a machine or a service that’s clearly not thinking about you and your needs and people like you, I think you can walk away from that experience thinking, ‘This isn’t for me. The people who made this weren’t thinking about people like me, that I don’t matter.’ I think that’s a lot what previous voting technology has silently signaled to people,” Catalani says.

The system uses a touchscreen display as well as a tactile keypad as an option for navigation among more robust access features (see part one of this series). What fundamentally distinguishes it from other accessible voting machines, however, is its adaptability and capacity to evolve over time. The design team emphasizes this will be a publicly-owned technology, not proprietary to any one voting system company. Components of the system may be swapped out to accommodate future needs and tech improvements. Upgrades for efficiency, security, and accessibility may be incorporated; indeed, the system presumes an ongoing evolution.

Dean Logan, Los Angeles County Registrar/County Clerk, began this project in 2009 but does not anticipate an endpoint: “It’s a process that should always be improved. I don’t think you can get to the ultimate solution and I like that. I like the challenge of the ‘How can we make it better? How can we continue to respond to the needs of voters? And be sure that everyone has the opportunity for their voice to be heard” (recorded in the YouTube video Democracy by Design).

Diane Golden, Ph.D., ATAP Director of Programs and Technical Assistance, served on the LA County Technical Advisory Group as they developed their booth prototype. “They are doing their level best to make sure the digital interface actually provides accessible marking, verification, and casting,” she reports.

The system relies on QR codes to store ballot content, however, which does not have the support of all security experts, she says. An advantage of QR codes is an opportunity for a voter to make ballot selections on their own mobile device–which is often customized for accessibility–and then scan the code at a vote center using the same accessible interface that produces a traceable paper ballot (as required by CA law). This could help reduce wait times and encourage voter turnout and engagement.  It remains to be seen if the QR codes will pass security muster.

“When I think of individuals I know who have always, always, always wanted to vote in person and have never been able to–to really know that they’re going to have a way to do that–and to have a private vote, where they can be independent and not have to ask for help. I think that’s amazing!” — Terri Lantz, Client Rights Advocate, United Cerebral Palsy of Los Angeles, Ventura and Santa Barbara Counties (recorded in the YouTube video Democracy by Design).

The LA County voting system is expected to go online in 2020.

Free AT Webinars in September
Next