Published On: August 20, 2018•Categories: AT Tips, Emerging Tech, for Voting•

The second in our three-part series on accessible voting systems. Thanks again to Diane Cordry Golden, Ph.D., ATAP Director of Programs and Technical Assistance for collaborating with us on this series. 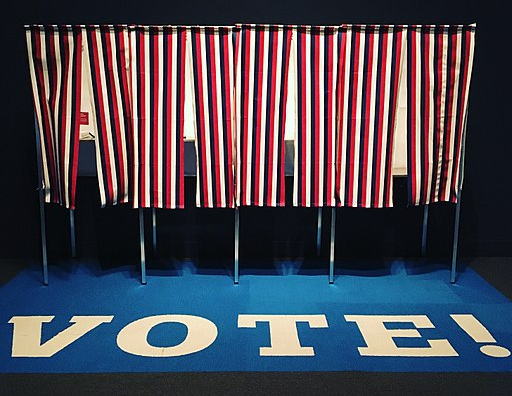 In 2002, the Help Americans Vote Act (HAVA) established minimum standards for federal election administration, including updating and upgrading voting equipment. The expectation was the new equipment would allow individuals with disabilities to independently and privately mark, verify and cast their ballots.

That expectation, however, was based on the assumption that ballots would soon become paperless.

After all, HAVA was enacted following the 2000 general election when paper ballots–always an obstacle for accessibility–were considered outdated and prone to error by most everyone (recall the “hanging chad“). 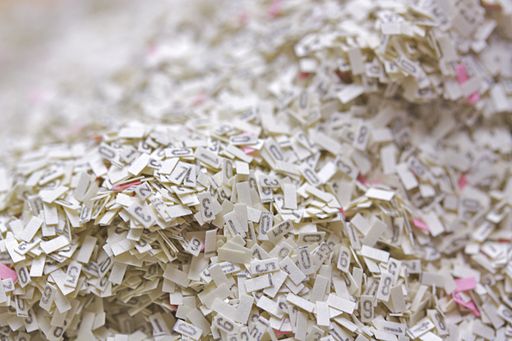 The time had come, or so it seemed, for Direct Recording Electronic (DRE) voting.

The rights of persons with disabilities were helping drive this transition to electronic voting. HAVA required states to phase out voting systems that involve levers or punch cards and phase in accessible voting systems “that provid[e] the same opportunity for access and participation (including privacy and independence) as for other voters” (52 U.S.C. §§ 20901–21145).

“Accessibility technology is light-years ahead of where it was a year ago, and there is no reason that any polling place shouldn’t be accessible today from an equipment standpoint.” –David Hart of Hart Intercivic, a voting system manufacturer, to the Committee on House Administration on May 17, 2001

“No one anticipated the move back to paper and the associated access barriers,” she recalls.

In the years following the passage of HAVA, however, security concerns overwhelmed–and have perhaps forever stalled–any US transition to the electronic submission of a digital ballot.

In 2009, legislation was proposed to amend HAVA to ban Direct Recording Electronic (DRE) systems and require paper ballots. While it didn’t pass, many states now have laws mandating paper ballots and the vast majority have returned to hand-marked paper ballots (tallied with optical scan technology).

The exceptions are a few jurisdictions that maintain DREs with a printer add-on (a “voter verified paper audit trail” or VVPAT). The printer creates a secondary ballot for voter verification that can be used in a recount or audit. These hard-copy ballots are not accessible for verification, however.

Parked in the Corner: Ballot Marking Devices for “Special Needs”

Most polling stations attempt to comply with HAVA by providing voters with disabilities use of an isolated Ballot Marking Device (BMD). BMD machines provide accessible marking (with the features described in detail in our last post), but they do not provide a way for voters with disabilities to review their marked paper ballot for errors or a way to cast them independent of assistance. 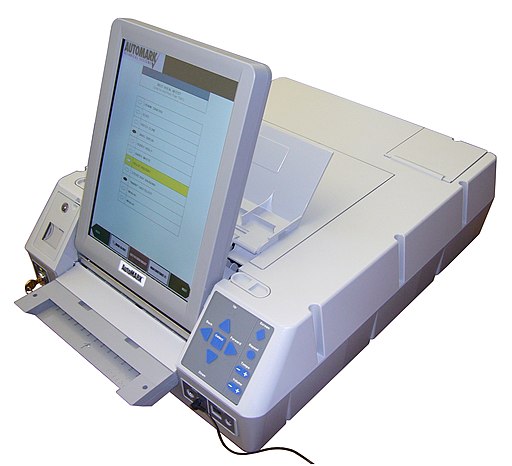 An AutoMARK ballot marking device. Voters insert a full-sized optical scan ballot in the front and vote using the touchscreen or with the tactile navigation or other assistive technology. The device marks the ballot and returns it to the voter for casting in a ballot box or scanner. Photo credit: By Douglas W. Jones [CC0], from Wikimedia Commons

“The first few times that I voted, I had to have someone assist me with marking the ballot. Hopefully, the people who helped–they were people I didn’t know– […] I assume that they marked what I intended for them to mark, but I don’t have a way to verify it.”
— Michelle McGrew, a voter in California who is blind, interviewed for Radio IDEO.

BMDs may also create a different paper ballot than what is marked by hand by most voters, thereby compromising a voter’s confidentiality. Both the ADA and HAVA require the entire voting process to be private and independent, to offer the same voter experience as is afforded persons without disabilities.

Compounding these technical challenges are the realities of an election system staffed by volunteers. “A segregated accessible machine means poll workers are unlikely to know how to set it up or how to help someone use it,” Golden says. Commonly, the accessible machine is only set up when someone requests it. (Golden always requests it and reassures the volunteers that she can help them get it up and running.)

“The vote is the most powerful instrument ever devised by man for breaking down injustice and destroying the terrible walls which imprison men because they are different from other men.”
–Lyndon B. Johnson

Learn what to do if you encounter problems at your polling location
Register to Vote (takes an average of 2 minutes)
Live in a US Territory? Find how to register here
Voter Registration Deadlines from USA.gov (subject to change)
Directory of state protection and advocacy voter assistance hotlines
Voter’s Guide to Federal Elections from the US Election Assistance Commission

Accessible Voting Systems--Two Steps Forward, One Step Back
Next

Prepare in Advance of Election Day