3D Printed AT: Where to Get Started?

Thanks to Shawna Hanson of MonTECH, the Montana state AT program, for this post about her foray into the wonderful world of custom printed gadgets! 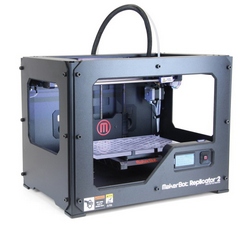 Three-dimensional printing has revolutionized the world of prosthetics and adaptive equipment. We’ve been reading articles stating as much for years, accompanied by dramatic videos showing a delighted person flexing a new 3D-printed hand. When a 3D printer arrived at my son’s elementary school, I was impressed with the plastic figure he brought home. But his tiny ninja warrior seemed far removed from the prosthetic hands in BBC videos. I assumed production of useful equipment was still in the realm of laboratories and college tech programs.

Until I stumbled across this article: “Nintendo Switch controller adapter makes games a lot more accessible.” An engineer designed a one-handed adapter for the Nintendo Switch for a friend who had lost the use of a hand. Not only that, he made his 3D design free and available to anyone who might want to duplicate his product. Too good to be true? I decided to see just how accessible 3D-print technology is for a Montanan in need of adapted equipment.

Download and print the free 3D model file. (For example, go to Yeggi.com and type ‘disability’ in the search window. My search brought up 937 printable 3D models.)

March across campus to The Paw Print in the Mansfield Library and introduce myself to Program Manager Glenn Kneebone. (Printing businesses across Montana offer 3D printing. Some public libraries also have 3D printers.) [Editor’s note: beyond Montana, 3D printers are also available at many community colleges, vocational schools, community maker spaces and online through 3D printing services such as Shapeways and Sculpteo.] 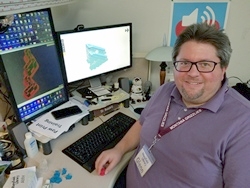 Kneebone is a congenial guy passionate about his work. “The romantic way of describing (3D printing) is that you’re writing solids with light,” he explains, referencing Paw Print’s newest 3D printer which uses lasers to solidify resin into a solid 3D model. Kneebone has a nameplate on his desk that reads “Dr. Buzzkill.” In response to my query, he clarifies, “I like protocol. There are certain things you have to do a certain way.” He laughs and adds, “I’m also available for parties. If you want to clear out your guests, invite me over.”

Pleasantries aside, Kneebone shows me the printer he will use to print our one-handed adapter for the Switch: the MakerBot Replicator 2, priced at about $2500. “This technology is not new,” Kneebone explains. “What is new is the interface and software, and the low price of the machines. They’ve made it so you don’t have to be an engineer to run them, and the cost of the machines makes them accessible.”

The MakerBot will build our adapter out of corn-based, human-safe plastic, making it light and cheap. The machine will heat a coil of plastic to 230 degrees Celsius, then build the adapter layer by layer.

Stand hypnotized, watching the MakerBot move back and forth building the adapter one layer at a time.

Three-dimensional printers were designed to create prototypes. They are good for customization, but not mass production. “The best part of 3D print technology is that it allows people a custom fit,” Kneebone says. “Especially with children, you have the ability to upgrade and change and the expense is nowhere near the price of a prosthetic. Are they as refined as a professional prosthesis? Not even close. But there’s that old adage, something is better than nothing.” To use our project as an example, it would not be cost-effective for Nintendo to create and mass produce a one-handed adapter. The library’s printer makes it possible for us to meet an individual need by printing one ourselves, in only 1.5 hours for less than $5.00.

Three-dimensional printing at The Paw Print is accessible to the public, but pricing varies. Current faculty, staff, and students receive a significant discount.

Borrow a Nintendo Switch from my reluctant teenager, who admonishes me “You break it, you buy it, Mom.” Like I didn’t buy this one…

Take a camcorder to BASE, where comedian and Summit Youth Coordinator Michael Beers has agreed to trial our adapter.

BASE is run by Summit Independent Living Center in Missoula. BASE, as explained by Beers, provides a safe place for people of all ages and all abilities to socialize, learn, or just feel comfortable and safe. The program seeks to build community devoid of labels. Beers explains that like ‘home base’ in a children’s game of tag, BASE provides a space where “no one will mess with you. And like home base, I can always come back, but I can never stay.” BASE’s programs include game night, improv, open mic nights, and currently a dance class.

Beers, who has limited use of his right hand, agreed to trial our Single Hand Joy-Con adapter (Joy-Cons are the removable controllers for the Switch). We removed the Joy-Cons and inserted them into the adapter, placing the controllers inside the angle rather than outside so less reach would be required. 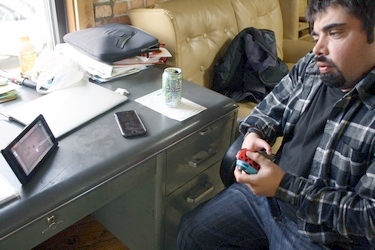 Beers found the adapter made the Nintendo Switch accessible. “I can reach both the directional toggle and the buttons,” he explained. “There’s never been a system, that I’ve played on, that I could do that. The buttons are always on opposite sides of the controller.”

Madison Halland also gave the adapter a try. Halland took very little time to get comfortable with the adapted controller. “It’s pretty easy to navigate,” he commented. “It’d be a little easier if the two sides were a little farther apart.” Beers, too, noted that widening the angle would make the controller easier to use.

That’s the beauty of the 3D-printing process. The engineer who came up with this design altered it slightly when his friend needed less space between the two Joy-Cons. Should Halland want his own adapted controller, he could alter the design accordingly, then print up his new customized adapter in about an hour and a half.

Pause and reflect. Does 3D printing offer limitless opportunities for adaptation and customized fit? I believe so. Can the average Montanan access this technology and put it to personal use? Yes!

Technology that is affordable, accessible, and allows fast customization right here in Montana? I’ll drink to that! (Right after I print my new cup holder.)

A version of this article was originally posted October 12, 2017, at the MonTECH blog

Learn more: check out the Instructable Introduction to 3D Printing

Free AT Webinars in January
Next